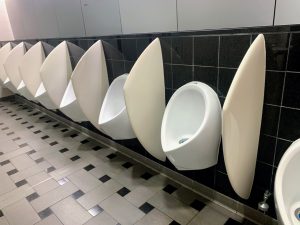 ZeroFlush Waterless urinals supplied and installed by Whywait Plumbing are precisely what they sound like. Instead of using water to flush away the urine, like traditional urinals which waste anywhere up to 25 litres of water every time they flush. ZeroFlush waterless urinals utilise gravity, putting urine through an odour barrier or one-way valve system which eliminates 100% of the water from a conventional flushing process.

Replacing a water flushing urinal with a ZeroFlush waterless model can save an average of 152000 litres annually per urinal. There’s one urinal for every three toilets in non-residential properties, which together account for more than a quarter of Australia’s water consumption.

The supply of water to commercial office buildings, shopping centres, educational facilities and hotels utilises a substantial amount of energy. The simple act of installing ZeroFlush waterless urinals and the disconnection of urinals from a buildings water reticulation system can reduce by 50% a building’s greenhouse gas emissions.

Throughout Australia, water charges continue to increase annually. The advent of sewerage discharge factor charges based on the amount of water consumed is increasing in popularity. These charges alone require reductions in water consumption to avoid substantial annual increases. For commercial property managers, this means they must budget for paying for water coming into the building and also going out via the sewage system. This means the installation of ZeroFlush urinals will not only aid with sustainability but reduce water and energy costs.

e  Shanghai Environment Project Design Institute once again proved that waterless urinals contain five times fewer bacteria than water flushing urinals. Bacteria and germs from water flushing urinals are created by airborne fecal matter that is reproduced when the urinal flushes water. The combination of water moisture with the fecal matter creates the perfect environment for bacteria to grow and flourish. As waterless urinals don’t flush water every time they have been used the opportunity for bacterial and germ contamination becomes very remote.

The real reason most male bathroom facilities have putrid odours is triggered by the bacteria created from airborne fecal matter and water moisture. Urine by itself has a very soft odour but combined with the water flushing urinals spraying of water particles it can quickly create odours over the entire bathroom facility.

ZeroFlush waterless urinals are a guaranteed path to reducing water and energy consumption plus greenhouse gas emissions in any non-residential commercial building. Installing them will always help water and energy sustainability.